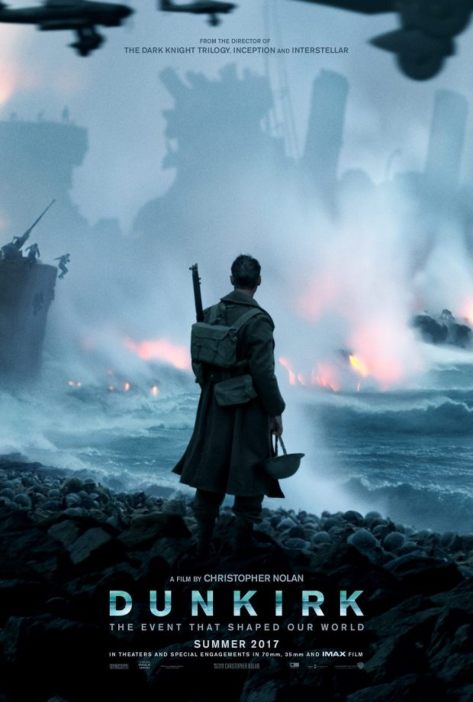 We have discovered you after your Batman trilogy. Saw the visionary that you are through Inception. Then went back in time and stumbled upon your earlier work that left us with nothing but awe and admiration for what you are. A new age writer-director who speaks through his art.

Your Bruce Wayne was not just a masked vigilante. He was a lonely lost man trying to make sense of this dark world. Your Dom Cobb was not just a thief. He was a father trying to get back to his children. Your Will Dormer was not just an insomniac. He was a man torn apart by his morals. You are known to create grey characters. And you are damn good at it. But there’s one more thing you’re even better at. That’s creating your negative characters.

I believe your movie is only as good as your Villain. And I think your best movie till date (audience choice) The Dark Knight proves my point completely. Then why have you omitted all that we love about you with your latest venture?

Dunkirk – is chaos. It is not self sufficient. It does not have it’s own universe like your other films. And despite having its moments, it fails to move the audience. I couldn’t even remember the names of your few lead characters. Didn’t even see the gruesomeness of war. Didn’t feel how fragile life is. I did not know what to take back from Dunkirk.

Do you know J J Abrams – The Director of the new Star Trek franchise? For a really long time his name was synonymous to lens flares. Or Michael Bay for that matter. Do you really want your name to be equated with a gimmick that you keep repeating in all your films – Spectacle?

Yes your films are full of them and we enjoy them to the core. But your movies should not be a wild compilation of grand shots. We expect more from you.

After The Dark Knight Rises, we felt this is one minor bump in your film making journey. Interstellar was flawed on many levels. But Dunkirk marks something ridiculously unexpected.

We appreciate you taking on diverse genres. But you must ask yourself, if you are losing your own unique take on your films. We admire you for the work you have done in the past. But don’t expect your audience to return to the theatres based on your past success.

Hoping, something worth watching next time.

The story opens as sleep deprived detective Will Dormer (Al Pacino) gets down with his partner Hap Eckhart (Martin Donovan) in a town best known as “the fishing capital of the world”. These veterans are on an assignment to to assist the local police with their investigation of a 17-year-old Kay Connell’s (Crystal Lowe) murder. At the same time, Dormer is going through an intense investigation by internal affairs. And the verdict may ultimately have a great impact by his partner’s testimony.

In an attempt to find the murderer and put an end to the case, Dormer accidentally shoots his partner. Eckhart dies before he could tell anyone who fired the shot. Dormer believes that it would be impossible to convince that it was an accident as the internal affairs wouldn’t ever trust his word. A young local police officer Ellie Burr (Hilary Swank) is put in charge of Eckhart’s shooting.

Dormer tries to put the blame on the murderer but Walter Finch (Robin Williams) outwits him. To return his favour, Finch blackmails him to put the blame of Kay Connell’s murder on her boyfriend. Now it is Dormer’s choice. Finch puts him in such a situation that he has to choose between his career and this one case. And everything else is just too interesting to spoil it over here.

The film is a remake of a Norwegian film of the same name, made in 1998 by Erik Skjoldbjærg. Christopher Nolan belongs to that category of directors who love to write their films. And Insomnia might be the only film in which Nolan has no credit as the writer of the film. And yet, surprisingly enough the film has many elements that signify that it is a Nolan’s masterpiece.

While reading more about the film I just discovered how perfect the casting of the two lead characters is. Dormer is guilty of his crimes and he knows that he deserves to get caught. He is burdened and tired of carrying it all by his own. And all of this shows on his face. On the other side, Finch is confident. He is calculated and he knows that Dormer will eventually give in. Finch’s face is straight and composed.

There are more important characters in the film than the names shown in the credits. The location itself, with daylight for 24 hours without any discount gives an additional reason for Dormer to be an insomniac.

I believe that names are everything. Whether they might be the names of the characters or the title of the film. You hear the names of important characters at least ten to twenty times in the whole film. It tells you a lot about the character and gives a poetic weight to everything that happens. Similarly the title of the film sums up what the film might be all about. And that’s why in my recent film Boundary I waited till the very end to finalise my title.

The film explains to me what a grey character could be. A character trapped in his own actions with a past that haunts him every minute. Guilt and regret fuels his behaviour. It is what the person thought was right at that very moment. In Insomnia it is not just Dormer but also Finch, troubled by their respective pasts. The similarity of the situations is a matter awe. And none of this could be termed as wrong when seen from the character’s perspective. And it is all perspective and opinion in the end.

Insomnia is an American Psychological Thriller and one of my personal favourite films. Not that I can watch the film again and again. It is somewhat heavy as it should be. But I there is a lot that I have taken back from the film.

Obsession is the single most wasteful human activity, because with an obsession you keep coming back and back and back to the same question and never get an answer.
~ Norman Mailer
The movie is ranked 52nd in the IMDb top 250 list.
This is how I was introduced to Christopher Nolan. The Dark Knight –> Inception –> Memento –> Batman Begins –> The Prestige –> Insomnia –> The Dark Knight Rises and I am yet to watch “Following”
The film is an adaptation of Christopher Priest‘s 1995 World Fantasy Award-winning novel of the same name. For a film based on two (?) young magicians, it accommodates more than enough mystery. Right from the cold start of the film there are attempts made to distract you, mislead you and eventually surprise you. Just like a magic trick.
In our worlds we had Tesla and Edison. (Read more about Tesla.) Both men in their own ways managed to “shock” the world. The rivalry of Robert Angier and Alfred Borden does not fail to make us think whether the characters are based on the lives of these two inventors. Of course the plot is completely different but the fight of ideologies is somewhat more than similar.
It is all about obsession. We are often taught that we need to devote our lives to a purpose. But sometimes, a purpose so strong can simply take over the soul of living. One must find the right balance. And here lies the dilemma. Give it too little and it slips away from you. Give it too much and it makes you its servant. There is nothing wrong in either of the ideologies actually. It is all a matter of perspective.
I have written about this earlier that how the bad guys of the film can make you hoot for them. All the characters in the film have something that one can hate them for. Honestly speaking when I started watching the movie I was on Robert Angier’s side. Maybe towards the middle I was forced to switch sides. That is the power of grey characters. The white knights are boring. Grey characters don’t have to be morally right every time. Because right and wrong is the matter of perspective.
The secret impresses no one. The trick you use it for is everything. Isn’t this the bottom line of every art form? Let’s talk of film making. We see the end result in theaters. No matter what, every film is at least a little different from what the makers thought it would be. There are so many factors involved in film making that even the flutter of a butterfly can cause a tornado. When we see a film we see the result of many decisions taken at the end moment. Many mistakes turned out as blessings on the edit table. And the secret behind it simply kills the magic. That’s why you don’t really want to work it out. You want to be fooled.

“It’s only when we wake up, we realise something was strange.”

Inception is ranked 13th in the IMDb top 250 list.

No idea is novel enough. There are similarities between the plot of The Matrix and Inception beyond one can imagine. There are only seven basic plots in the world. Yet, we have a new apocalypse movie every year. We do enjoy indulgence in the subjects we already love.

Even in such a redundant plot of creativity, films like Inception stand out. Why exactly? The secret lies in the details. Easter Eggs are one thing but the intricacy in which all the subplots are interwoven. A golden rule of making films is everything should have a reason; cause and action. Nothing happens without a cause and every cause has some or the other consequence. If any line, if any shot, if any reaction is not essential for the story to unfold, it is not worthy of the audiences’ time.

I learnt this lesson while making my recent short film for the 16th Mumbai Film Festival. Usually while writing a film we tend to immerse ourselves into the dialogues.With more and more emphasis on words than visuals. Then comes the job of a director. Who takes over the hard copy from the writer and converts it into a visual medium. Often important scenes and even characters need to be left aside in order to be honest to the time constrains and for an effective presentation of the story.

A fellow blogger has explained the whole story of Inception on his wordpress blog. And I thought he is the best person who can explain it to you. Here is the link.

Totally off the topic, yet interesting enough; this is an awesome article about some common movie misquotes. Worth a read!